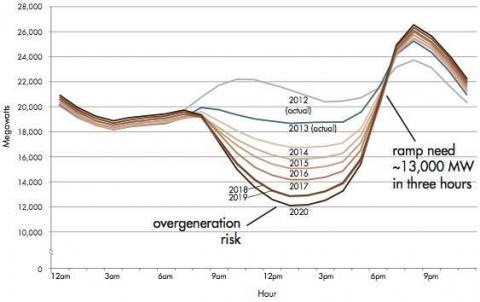 For obvious reasons, BEST is a keen supporter of energy storage. All the predictions are for installations of grid and domestic energy storage to experience huge growth over the next decade – read any of those rather tiresome reports by Frost & Sullivan, Navigant et al for more detailed crystal ball-gazing.

But there’s good reason to believe energy storage is not ready for prime time. Not yet.

That’s not so say there is no need for energy storage. In California, this is neatly illustrated by the so-called ‘duck curve’ above. The neck of the duck is the increasing ramp rate of peaking power plants as backup for the ever-deeper penetration of variable wind and solar power.

As yet, however, the numbers aren’t working. The arbitrage opportunities arising from the ‘duck curve’ – storing power when cheap to be used at peak times – are much less anticipated and the difference is too small to finance storage.

In general, there is not yet a market for energy storage. This comes down purely to costs. Where storage does make sense now is on islands with limited grid infrastructure, like Hawaii, or the US Virgin Islands, where the retail electricity price is an astronomical $0.52/kWh.

In mainland USA, storage works for frequency response in markets such as the New York ISO, where a recent change in regulation rewards the inherent advantages of storage, i.e. response in milliseconds rather than minutes as for gas-fired peaker plants. However, it has been noted by the Electric Power Research Institute (EPRI) that the frequency response market for energy storage is in danger of becoming saturated over the next five years.

And the costs of energy storage, of course, are not just down to the battery. Power electronics and the balance-of-plant account for up to 60% of the system cost. Concrete pads to park battery storage systems can be surprisingly expensive, as too can the permitting process.

Moreover, the industry does not yet have the reliability desired by financiers to be bankable. Just because a battery may come with a warranty, developers cannot be 100% sure that the batteries will perform as they should, when they should. Cycle life data of ‘real world’ energy storage data is very limited for systems deployed in the field.

Getting utilities interested in grid storage will be a challenge. Utilities tend to think in decades of operation, rather than years, when it comes to investing in components. Furthermore, energy storage is seen as having relatively poor ROI and utilities are said to be worried about ‘hidden costs’.

In most cases, an energy storage system needs to cost $350/kWh to be in the money, according to EPRI. The average system cost of $1000/KWh, not to mention an operations & maintenance cost of $200/kWh, suggests this may some time away from being viable without subsidies, mandates with regulated returns etc.

And the ‘operating systems’ of energy storage systems are where computers were 30 years ago. They are currently in a pre-Windows world, not particularly user-friendly, not plug ‘n’ play, with few standards and codes for utilities to be comfortable with connecting an energy storage system into, for example, a transformer.

Furthermore, the so-called ‘value stack’ of energy storage for utilities – frequency response, network investment deferral, arbitrage, voltage regulation, peak shaving and so on – is great in theory but in practice, no-one yet knows the capex cost, or indeed, if a battery system is up to the task of such multi-functionality.

Of course, energy storage developers will be armed with performance guarantees from battery manufacturers, but for 10 years plus? 20 years? Not yet.

Undoubtedly there will be growth in energy storage. Much like EVs, however, the hype will not be borne out by reality.

Read the Summer 2014 edition of BEST for show reports of the annual US Energy Storage Association conference, the International Flow Battery Forum and much, much more.